The Overgrown Adolescent Male’s Guide to Proposing at a Band of Heathens Concert. 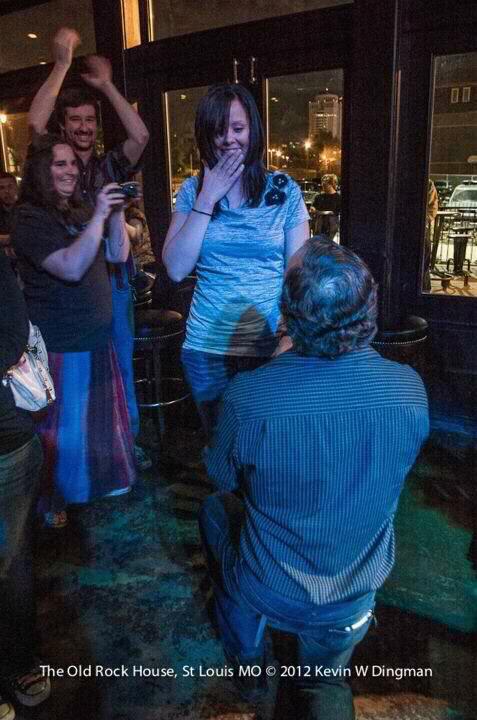 As told by an Overgrown Adolescent Male who Proposed to his Amazing Girlfriend at a Band of Heathens Concert, and got a YES 🙂

Step 3. Be Intentional and Committed and KNOW that it WILL be special, some how, some way, because the Love of Your Life deserves it.

Good enough?? Cool. Follow these easy steps, and your proposal too, will be Awesome!

Actually, these steps are the ones I took last Sunday night, but it was’t quite that easy.

Along with a gut-load of anxiety, plenty of fears that I’d blown the surprise, and a bunch of divinely orchestrated circumstances, I can only say that I had a lot of Angels looking out for me that night.

Showing up in St. Louis with a plan to propose was just the start. I had a ring in a box in my suitcase. We had an hour or so at the hotel before dinner. I wanted to make this happen at the concert, but didn’t have any idea how to go about it. (This is my first time and all.)

Every small thing I did, felt like a huge giveaway of the surprise, to me.

At the hotel, I had to get the ring into my pocket. I had to check it every few seconds it seemed, to make sure it was still there.

At dinner, I was on edge.

When we got to the venue, and Lindsay was away for just a minute, I boldly asked the attention of Harley, the soundman, right in the middle of his work to get things setup for the show. He was so gracious and got on-board right away. Wow!

He offered to show me the set-list as soon as he got it.

Geeze, what a bunch of knots my stomach were in!

Every sentence we discussed with the other fans was a blur, as I waited to hear back from him, and praying that things would work out.

He walked behind me and gave me a wink to follow him. I flat out walked away from Lindsay and even told her, that I had to talk to Harley real quick. Ahh! Why didn’t I say I was getting a drink or something?!?!?

He showed me the list of songs. Bumblebee immediately caught my eye and he asked, “Do you want us to pause for the cause?”

How cool is that!

So with the song in my mind, a ring in my pocket and literally front row spots, right at the stage, I went back and tried to act “Normal”.

That’s just when Gordy (one of the lead singers) walked passed and whispered “Good Luck” to me, as he went up on stage!

The first few songs rattled my crazy brain, as I waited for Polaroid. I was PUMPED, and the guys sounded awesome. I knew the next tune was my cue to make a move.

{The reason I’m telling this story is so that I’ll have it to remember someday down the road. I also want to express the simpleness, the minimalism, the lack of my preparation. And then show the contrast of how full and rich and loaded with goodies the experience was, all out of divine blessings. }

So we happened to be friends through FB with another Heathens fan, Vicki, who had the table right up front. She had a photographer friend too. And she was running video. And then the Corkery’s were fun and friendly and sharing the space also.

So as the song Bumblebee started, I stepped around Lindsay and grabbed her hand…

I felt calm and clear, and said, “That’s Okay, I don’t want to dance right now either.”

That’s when I knelt down and she immediately knew what I was up to.

The band was into the song, The crowd had noticed my move, People were cheering, and I tried to speak through the volume.

“Lindsay, you’re my best friend. Your faith and your support, your acceptance and energy are a true inspiration to me. Your presence in my life is an absolute treasure and blessing and more than I deserve. I want you to know how deeply I love you. I want to share and create our spectacular lives together forever. Lindsay, will you marry me?”

But she couldn’t hear me 🙂

Anyway, she said YES. And I got up, and kissed her, and then danced just a little bit.

(really listen to this tune, it is soo, sooo goood!)

The Band kept rockin’! The crowd cheered when all the guys congratulated us from onstage. I enjoyed the rest of the show, with a lot less anxiety, and a brand new fullness of connection with my fiance.

Throughout the rest of the evening, it became clear that we were given awesome gifts of love from all the people around us. Without Harley’s help and openness, it couldn’t have been so smooth. Without Gordy, Ed, John, Seth and Trevor, it wouldn’t have been so publicly celebrated. Vicki and Kevin and Candace and Chris all got pictures and videos and hugs. The band also just started offering USB drives of the entire show, at the end of the show, so we were able to get audio of the whole thing, and I’m listening to it right now 🙂

Anyone who knows me or has followed this blog for a long time, knows how special the Band of Heathens is to me. I truly feel that their music, their presence in my life was dropped right out of the ether by Angelic forces at powerful moments in my life. This continues that tradition in a BIG WAY!

First of all THANKS to Lindsay for all that she has meant to me, it’s more than I am capable of expressing here. Thanks to EVERYONE who congratulated us this week, it’s made us both feel extremely loved. Thanks again to the fellas in the band. The were just soo accommodating, so willing and open to help me out. And we had a blast talking with them afterward too. We’ll be going to their shows as long as they keep playing! Also the fans and friends of the Heathens. And deeply, sincerely, unabashedly, thanks be to God, for proving without a doubt in my mind, that real love and real miracles are possible in our real everyday, regular-people lives.

Even in the life of an overgrown adolescent male.

Here are a couple more of my Blog Posts ’bout the Heathens:

I Give Up – Double Down Weekend News 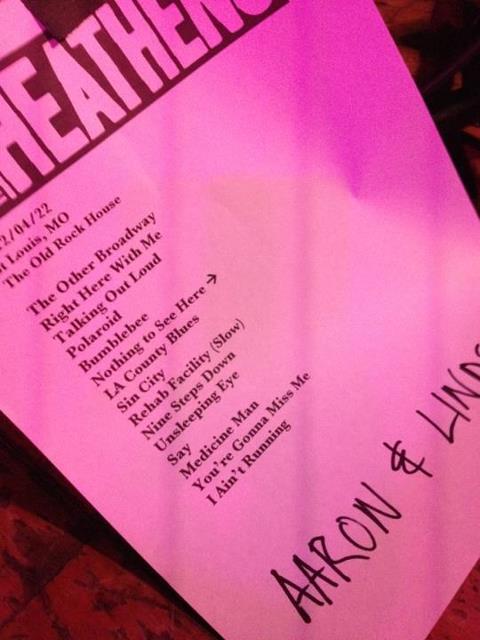 7 thoughts on “The Overgrown Adolescent Male’s Guide to Proposing at a Band of Heathens Concert.”