Why stay dry while double downing delicious doses of high volume heathenry a mile above sea level in downtown Denver??

In the last month or so, a pondering thought I’ve chewed on, is whether I’m living as a “personality” or living with a “purpose”. I think this concept and its contrast was brought up in some material I read by Steve Chandler. (a really righteous dude!) Since reading it, I’ve been thinking hard about my current motives in this crazy solo-prenuer/soul-searching/ Free Agent adventure I’m on.

A quick explanation is that when living as a personality, we put emphasis on our identity as a person. We have our stuff that makes us who we are. We have our tastes and skills and our titles and all that jazz to explain us to ourselves… and if that stuff is gone, or changes, then what are we left with; maybe nothing??

On the other hand, living with a purpose (very condensed version 🙂 is the knowing of that One Thing, that is our unique service to the world. For me, it would be the One Aaron-Shaped Hole that I was handcrafted by God to fill here on Earth.

Wow, pretty daunting task for me to figure out, and I think very few actually do.

Some may be born with this knowing, others discover it through living life’s challenges. I now struggle with deciding if I’ve followed my Brain down this un-trodden path to Free Agency, when my Heart is the one who knows the True Way?? Hmmmmm…..

This introduction to the idea for living with a “Purpose” is leading somewhere, I promise.

Through the constant repeating of this word in my mind:{ Purpose} and the silent praying for an answer to the question of “God, what is my purpose?” I believe He recently nudged me toward the path to answer.

Now! Jump back in time to a FUN-FILLED Friday Night. The date was September 29th. I had my first poker night with the guys lined up in what seemed like forever. This Friday tradition of the past has been on hiatus and everyone was chomping at the bit to play. On my way to town for grilling supplies, a good ole buddy called about shooting a quick 9 holes before dark… SURE! So rerouting the Trooper toward the golf course, my evening plans went from good to great!

After the several sweet swings, and a couple swigs of cold-beer, I arrived home just in time for the burger burning to begin. Poker players showed up, and more beers went down, the night was swimming along in friendly frolic and fun. I was even more elated to see a far-away fella walk through the door. A real solid dude from Chicago was visiting for the weekend and sat down to play. The night was just stellar!

The games went on and drinks flowed until we found ourselves at the local watering hole and exchanging some really deep and powerful philosophies on life. And this part is no kiddin’! Several meaningful moments were shared, I just wish I could remember them…

BOOM! Saturday morning SUN! My dry eyes creaked when they opened to a room that had elastic walls. As my head throbbed, my bedroom shrank and expanded with each slow pulse of dehydrated blood through my system… I realized I was HUNGOVER.

Making my way to the couch, I felt my Saturday was stopped dead in it’s tracks. I was going nowhere, and physically/mentally capable of next to nothing…

and then it happened.

Without Judgment. Without Blame. Without any Parental Disappointment whatsoever, I received a message, maybe from my subconscious, maybe from God.

In a dry as a bone, matter of fact voice, I heard in my hungover brain:

“God can only use me if I’m sober”

Yeah, I needed a blank minute to think about that one; because that’s big darn deal!

No drinking? Being sober means being useful?

What a drag! Throughout my teens/twenties and now thirties, I have involved alcohol in my good times, bad times and lots of other times in between.

Although more recently, I’ve felt less compelled to drink it up like “in the old days”. Still, I couldn’t ignore this message, and how it showed up on a day after I had let “one more” lead to “one more” and so on… I guess I still can let it go too far…

Well, being that sick and hungover makes you want to stay clear of any kind of drinking the next night, but what about the upcoming week, or next weekend or beyond?? At that time, I had no idea how I would handle this message, how it related to my search for a “Purpose” or anything else. So I discussed it with Lindsay, who supported me, and I also took it to the Wednesday night Bible study group, that I’m lucky to be a part of.

Those good guys heard me out. They understood, gave me feedback and more importantly, a challenge: Try to go the next weekend without any drinking at all… Wow.

Yeah, I had also just told them that my upcoming weekend included a Two Night, Three Concert event featuring my very favorite Band of Heathens! Called the Double-Down in Denver, this long awaited weekend was to be a PERFECT place to rock out, kick back and suck down some drinks!

Whelp, like I told Lindsay, the Guys and Myself, I just couldn’t commit to absolutely No Drinking on this epic weekend adventure, but I would consider the message, the challenge and my own chance to grow and learn.

I have to admit that the thought was on my mind as Lindsay and I headed West early Friday morning. I wanted to enjoy our weekend together, enjoy the shows and see how the message played out.

Right in step with my thoughts on throwing the whole idea to the roadside, an AM station playing some kinda sermon popped up on the radio. We were in western Kansas and only a couple more hours to go, when I heard “Godliness leads to Usefulness. Usefulness leads to Happiness.” Wow. Okay. I AM HEARING YOU!!!!

So as we hit town and caught up with Twinny friends and family, I passed on the first couple BBQ Beers… Didn’t have to have them, we had the whole night ahead of us, right?

Later as we arrived downtown, my excitement was boiling up. I was about to see and hear, in person, the tunes that were the soundtrack of my 6,000 mile summer roadtrip. For the Friday night show, we were getting our bearings at the club, and as it filled up, I felt a little weird to not have a beer in hand, but overall, no biggie, I had the whole rest of the weekend right? 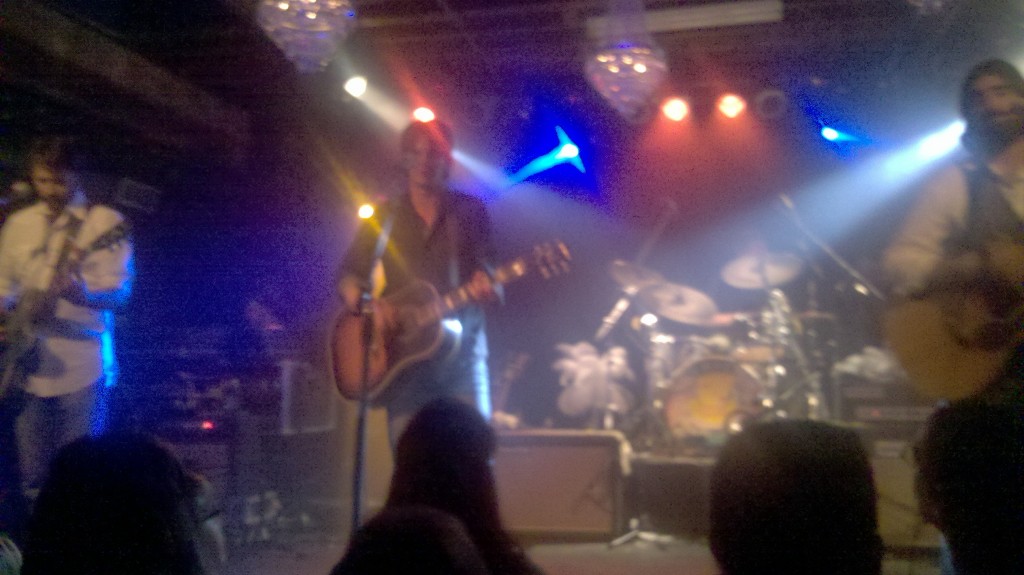 Well the Guys of tBoH absolutely rocked! My buzz-free mind was noticing everything! I saw a whole new concert perspective. My clear ears picked up every soul-sent note from the antique guitars and voices of the three lead singers, Colin, Gordy and Ed, to Trevor’s ole organ, Seth’s bass and John’s percussions! I saw the hard work of Harley the tour manager who fine-tuned the soundboard, song by song, with little hints winked and nodded from on-stage. Overall, I was so thrilled to be at that show at that moment, I didn’t even think about the lack of booze in ma’ body!

Their performance went fabulously late, the only overdose I felt the next morning? Music.

So with one show down, I still had two more I could enjoy a drink with later on Saturday. Well the day was a downer in Denver, starting with snow and continuing into grey cold drizzle all day… Kinda like Wine weather right?? Well how about smoked meat snacks for lunch and a nap in the king-size instead, we had another late night ahead ya’ know! 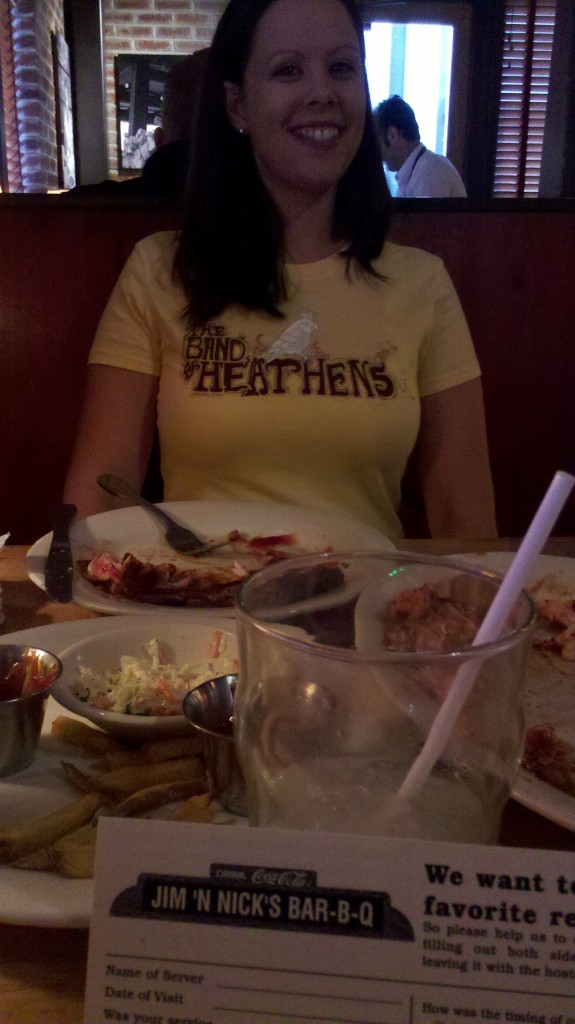 The afternoon got away from us, and all of a sudden it was time to head downtown to the Acoustic show at a cozy restaurant setting. I was excited and a decision needed to be made; take the shuttle and drink, or drive and don’t. Well we kinda played with both ideas and settled on drive, but maybe still drink. Cool, you know it was a looong night ahead and we still had plenty of time for just one or two…

Wouldn’t you know it, the Acoustic Show was so killer, so personal, that water was fine as wine we while tapped out the tunes, sitting almost with the band. 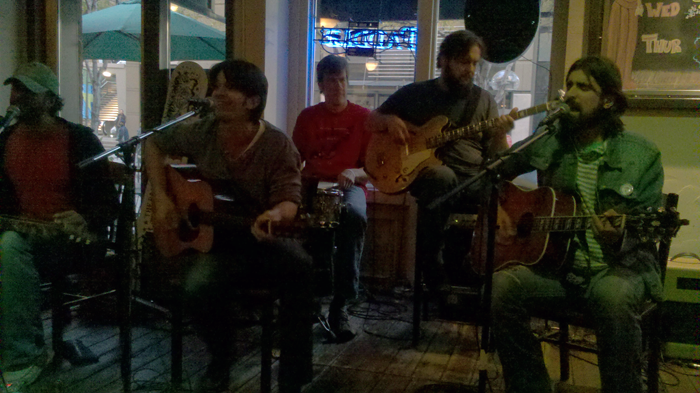 I can’t express the sheer amazing coincidential craziness of being in that place at that time, given my history with these guys and their music. I just love that Lindsay enjoys them too, it makes my heart sing.

So Anyway!!!! To wrap this story up, I passed on the drinks through dinner and even into the Saturday night roof-shaking, face-melting, front-row rockin’ good times that we were so blessed to be a part of. 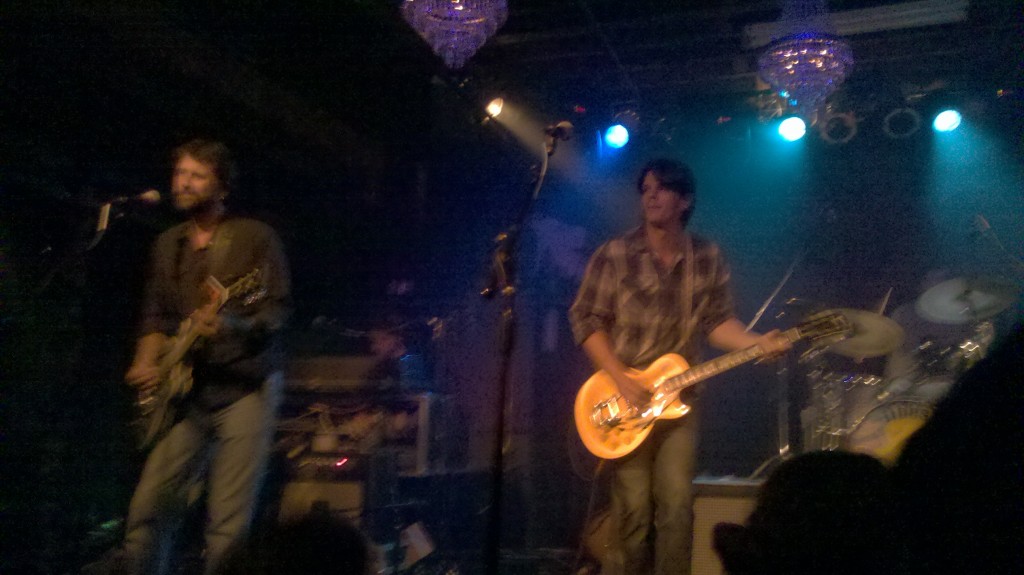 With the support of Lindsay, a challenge from the Men of my Church, and obviously lots of love from above, I somehow procrastinated on drinking long enough that the weekend passed without it, and without missing it much at all…

Ah! So! Thank YOU for being here to read these words, and now I want to explain something important! This message is NOT in ANY WAY intended to imply that anyone else out there should change a habit of their own, that they are already comfortable with. In fact, I think the reason this message resonated with me so well is that it was delivered in such a peaceful, neutral, loving and non-preaching, matter-of-fact way.

“God can only use me if I’m sober” Is a message for me and me only.

If this story resonates with you or if you feel compelled to ponder things like “God can only use me if I _____________” then that is completely up to you and Him. I’m just sharing another piece of my life; like always here on www.weirdforgood.com

And! I have to express the level of extraordinary favor that I felt throughout this weekend of temptation. Several times, Lindsay and I experienced neat little hints that we were being cared for by somebody, somewhere; the universe, God and all that good stuff!

Three examples that stand out:

Okay y’all! THANK YOU for hanging with me through this looooooong bloggy-ness. I appreciate every darn person readin’ this ole’ sucker!

I have no idea how my future is going to really pan out. Does anyone? I know that saying today that I will never have another drop of alcohol is something I’m not ready for. I also can tell you that I don’t feel convinced that I know my Purpose fo’ sho’ whatsoever…

But thank God, that he’s showing me just how serious I can get when I want to pursue my own dreams! Or maybe what a great procrastinator can really accomplish! HA! Either way, until next week, I’ll be in pursuit, and praying that your plans are purposeful and prosperous!

and that’s the true story of why I stayed dry while double downing delicious doses of high volume heathenry a mile above sea level in downtown Denver 🙂 bu’ dum’ dum’ crash!

for fans of The Band of Heathens – Here are a couple more links to blogs that I’ve written, mentioning the guys

6 thoughts on “I Give Up! At least for right now.”