Do I let my Lizard ride my bicycle? Sure Do. Sometimes it’s even a good thing.

So last Friday evening, I decided to pedal around for awhile and went on a cruise south, down the rail-trail to Richmond, KS and meandered back through the country roads home. 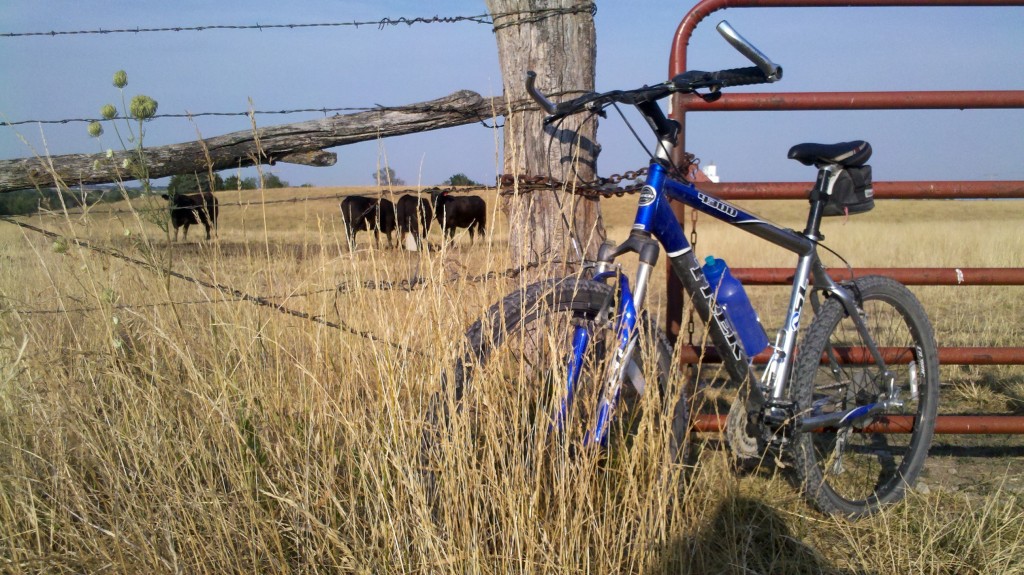 I had one of my favorite teachers, coaches and mentors speaking thru my headphones.

The low, monotone, intentionally slow pace of Steve Chandler’s voice fits well with the shoosh-shoosh and crinkle-pop-pop sounds of a mountain bike lazily crunching down a gravel road.

In this lesson he explained, the concept of our ‘Lizard Brain’ and how much too often, we use the most primitive reactionary survival-mode part of our grey-matter to operate from.

When this part of our brain is in control, we are instinctive, we are defensive.  We instantly judge, we see Good or Bad, and then act accordingly. It’s ‘fight or flight’ throughout our entire day or week, or whole life.We are living primitively, like a Lizard.

Uh-Oh… I resemble that remark!!

See, the other parts of our Creative, Compassionate and Enlightened Brain can operate in a profoundly beautiful and artistic fashion! We Humans have much more to use than the mere Lizard, although we must build this muscle and exercise it intentionally, to get the most from it.

So obviously, this message was hitting home with me, as I saw the places where I was operating through a reactionary mode, rather than a creative mode of possibility.

Creating is something a Lizard does not do.

Something that the Enlightened mind can do, is this: finding ourselves in the middle of a usually aggravating, or developing situation, then catching our reaction, and then asking,  “Given that I have this problem, what would I like to create?” (another Steve question)

This Enlightened and Mature Human response is something I’m choosing to work on, more often, for myself 🙂

Sooooo, Anyway, back to the bicycling!!

That night, I enjoyed the ride, it was a couple good hours of dusty pedaling and just being among nature. Thanks be to God!

I enjoyed it so much, that I encouraged Lindsay to join me on a similar trip early Monday morning. I was delighted when she agreed.

So we set off; her on the mountain bike, me on the cross. Cyclo-cross that is 🙂

We had been cruising along just fine and talking and pedaling…

We were almost a mile outside of Richmond when I had a big ‘OH CRAP’ moment!!

I had drifted a little too far to the left at the trail’s edge and the pea-gravel was real soft.

My skinny front tire had found a patch of sandy fluff and that wasn’t gooooooood!

My momentum was headed groundward!

Careening down, angling across the trail I was yanking my right foot, trying to release it from the shoe-pedal-locking system.

I clearly remember thinking that I must get my foot free, so that I could catch myself before hitting the dirt. But it took one failed try, then two failed tries, finally on the third I twisted harder, or just pulled with enough force to pop the shoe free from the pedal.

I was able to stop the fall of the bike and slow myself down at the same time. I was breathing heavy and that pit in my stomach radiated a weird heat that washes all over, whenever a close-call happens. But the bike and I were perfectly fine.

That close call only took a couple seconds, but to me, I can remember lots of clear detail, tiny moment by tiny moment.

Guess which brain was in charge right then??

Thank God Too! I did need that most primitive mode to fire up and take over, to assess the situation and quickly act. Yanking and Jerking, thinking only of self-preservation, that saved me from a potentially severe crash.

In the moments following, my more creative brain painted a picture of what could-have happened, and as I saw a bone sticking out of my imaginary busted arm, I was so glad to have saved myself from the fall.

Remember when I said, I was careening across the trail??

Yeah, that was right across the path of dearest Lindsay!

Thinking back, I do remember a flash of her passing right in front of my eyes, just before I got the bike under control!

Crap Again! She had to speed up to go around me, otherwise we’d have had a tangled-mangled mess of bikes, sprockets, chains and (possibly bloody) soft tissue!

It came through the air, from my beautiful finance, and it did not make me feel loved and supported in that moment.

So I fired back a sharp; “Well at least you were riding your bike, Not almost crashing it!”

We pedaled on in silence for awhile, while my heartrate slowly dropped and I realized it was all okay.

We were two fully functioning Lizards in that moment. Mine saved me from a crash, Hers responded by saving her from being crashed into.

Our exchange of words immediately after, was quite Lizardly as well. We both were thinking of only our own experience in that moment, not the effect we’d had on the other, or the possible danger the other was in, or anything sweet and romantic and compassionate, like two love-birds on a bike ride could be 🙂

It took me awhile to explain to Lindsay that it hurt me, when she wasn’t concerned that I’d almost had to use my right arm to catch my fall, which wouldn’t have felt good at all. And I did have to acknowledge, that I could’ve been aware and understood, her shock, when I was pointed straight at her.

I did realize that we were both using our survival modes at the time, and all was forgiven 🙂

And I was really glad that she had sped up and out of the way! Really 🙂

Also, she then explained something quite profound.

She told me that in the moment of my near-crash, she didn’t see that I was panicking.

She explained that it looked quite slow and graceful. Maybe deliberate. She thought I was goofing around, and just messing with her.

But that’s the Lizard at work.

I was only focused on getting my foot loose. No time to scream, no time to explain. I was all business, and no outward communication.

How often are we crossing paths with someone who seems to be all right, and doing fine. They may be jacking with our momentum. It may seem they’re toying with us or deliberately trying to mess with us.

We may not even know that inside, they are fighting for survival itself. It rarely ever, has anything to do with us. How they are acting is about them. Our reaction is about us.

And, how are we reacting in that moment?

I know I’ve taken a few of your valuable minutes to tell this little story, but I believe it’s important to notice this Lizard brain at work.

We do get to ask ourselves, anytime we’re not in a life or death situation, how we’d like to create our future. What the next step is that we’d love to take. How we can best serve our fellow man. We have more options, than just a gut-level reaction to a problem.

And even in a world with lots of problems, we’re creative and enlightened enough to get to ask ourselves; “Given that I have this problem, What would I like to Create?”

After Monday’s bike ride, I do have a BIG appreciation for the times we’re able to instantly find strength and focus to get us through a possible crash.

Lizard, I love ya, but from now on, I’m declaring that I only want your help for survival. I don’t need your input for every day living, or coaching, or especially in speaking sharply to my beautiful bride-to-be! Thanks Anyway 🙂