My heart was already pounding just a little too heavy, when Chad startled me by yelling to ‘Be Careful!’ I was just about to lightly touch the center portion of the wall switch that would engage the main overhead fire extinguishing system in our restaurant kitchen. The switch had been damaged, and it appeared that it may implement the whole-kitchen chemical fire suppressant at any moment. Like a hand grenade with the pin just about to fall out, we were handling it very delicately!

The box mounted on the kitchen wall is connected to our system by metal pipe. It has a small red plastic rod that holds the inner PULL-HERE finger-ring in place. That red plastic rod was broken on one side. Whoa. We just noticed the problem as we were closing down after a long night of serving food for our hungry customers. We were especially nervous to see that the inner PULL-HERE ring was already beginning to be cocked at an angle, like it was going to be released at any time.

As three of us guys looked at the halfway broken switch, we were imagining a kitchen full of foamy stuff to have to clean up, without any fire at all. We were being extra careful and working quickly to strap down and secure the ring, so it could not move and make a huge mess. We found some baling wire and with hands holding it tight, the guys locked ‘er down.

Whew! Crisis averted for the moment! Wow, that was a close call. We were quite glad to have avoided the expense and hassle of our extinguishing system shooting off for no reason.

So I then called in the Fire Suppressant expert to service the switch and check up on the rest of the components as well.

When he arrived, I was proud to ask him, what he thought of our nicely wired-down lock on the wall switch. He kinda chuckled and made a suggestion that surprised me greatly.

He said that he would have rather we put just a piece of tape on it, to hold it in place. ‘Huh?’

He said that in case of a fire, we would want to easily remove the tape, and the baling wire, could have been hard to work around…  ‘Okay… I get that part at least.’

‘But, but, but what about the pressure on that inner ring. Surely the tape wouldn’t have held that! What if the spring would have let loose on us! That would have been really really bad, right??”

What pressure, he asked? What spring?

I told him that we were sure that was how it all worked… But nope, we were waaay wrong.

He then explained how the ring was connected to a piece of chain. That chain had about six inches of slack. He told me that even if that inner ring would have fallen completely out of the wall plate, we would have had to pull firmly on it, past the extra slack, then yank enough to release the valve for the foam….

So basically, our keen senses of observation and imagination had completely overblown the dangers at hand. There really wasn’t any at all. Even though we could see the chaotic calamity of the kitchen full of fire retarding foam, it was never going to appear in real life. We had no real understanding of the mechanics of the system, yet we just knew that we were almost in big big trouble.

Shows what we know.

That service tech probably had a good story to tell his buddies about how we’d baling wired the thing. He did mention that we were probably ‘from the country’ and yes he was right about that.

How much of our lives is spent, holding our breath, tight with tension, locked onto fears about outcomes, that will just never materialize. What if we aren’t as smart as we think we are? What if we really don’t understand the construction of the very systems we inhabit every day? What if the design of our world has much more forgiveness and love knitted into it, than we ever imagined? What if we are making things much harder on ourselves than they need to be?

I think it’s funny that we were sooo wrong about this emergency switch. I was glad we weren’t needing to pull it, because of fire. I am happy to now know how it works, without experiencing the devastation that could come with flames in our kitchen.

These little metaphors and examples show up in my world all the time. Will I ever learn anything from them? I dunno. I hope so though. I do like to share them here with you. Thanks for reading. I’ll see you next week J 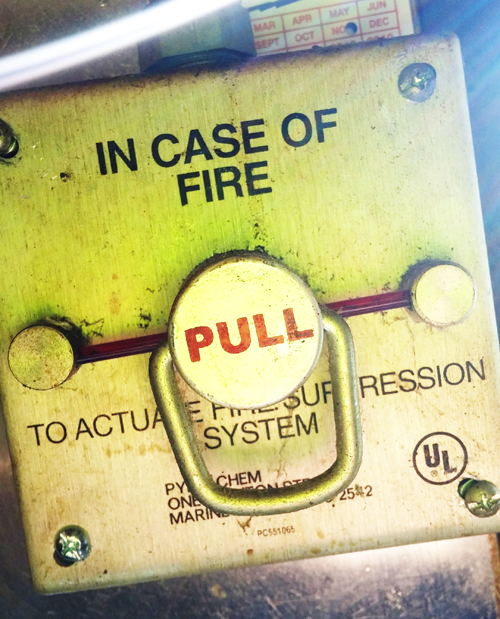