It’s dark and blustery out here tonight. The cruising clouds throw the occasional rain splat against the black tarp hung above my hammock. Fall is here and the breeze is biting with cold. I am on my front porch and camped out, as if I was deep in the woods on an epic adventure… But I’m not.

For over an hour I have worked to assemble my little spot here. I used my blue webbing straps and their metal curled hooks to grab ahold of the carabiners at each end of my hammock. I readjusted my homemade underquilt that I recently slapped together, to keep my tush warm. It needs a lot more work, but it is a start. I decided to run a new ridgeline and try out a rainfly I bought recently online.  I found my paracord spool and cut off a few chunks. I made knots and tightened things up, I made twenty trips in and out of the house, or more.

I started this project at quarter till eleven tonight, and just got near finished at midnight. I have made up a little happy hammock rig. I am pretty cozy, typing away while the wind blows and flaps all the fabrics. I may sleep here a bit tonight, after writing some blog, I may not. It isn’t really that cozy. I have more gear to acquire, to be completely comfortable, swinging out there in the cold.

Why would I spend over an hour at the end of a long day, making something almost ridiculously useless on my front porch, with the only intention to take it right back down soon?? I don’t know why I did. I just kept thinking about the one more little thing I wanted to add, then one more and yet one more. By the time I had a decent amount of comfort going, I didn’t want to quit. I wanted to make it just a little more deluxe and then a little more.

I do dream in the daytime about going out and camping. Heading to the mountains again, and hiking into a remote spot, I would enjoy the crackle of the fire and a night under the stars. Last night and tonight now too, I have tried to grab a little of that experience right on my front porch, in Princeton, KS.

Someone else is on my porch. Lots of someone’s. Little tan spiders with round fat butts, have set up their homes all over the place lately, Including my front porch. They are in yard. Their webs grab my face, I swat and fling and flail around. I look funny, when I walk through them.

One in particular has interested me. He lives in front of our back door. His web is made actually in the doorway itself. You have to duck just a little to avoid it, when passing in and out. This little guy recently has lost a couple legs. One of his big front legs is just gone. The little one behind it is too.  I remember when he looked ‘normal’ and now he isnt’. He or She, must’ve been in a battle, with one of the many other porch spiders living nearby. Maybe some big moth flew into his web and he lost the legs trying to wrangle and hogtie it with his silken wrappings.

Either way, this spider is has been roughed up, and is much worse for the wear. One thing that is obvious to the observer however, is just how normally spidery he acts. Since I pass him several times a day, going out of, and back into my house, I realize his activity has not changed much at all. If I provoke him, by getting close to look him over, he will bounce his web wildly.  If I strum one of the guylines of his web he jumps to attention. If I really wiggle things, he will retreat to the outer border or even all the way up to the soffit of the house.

His movements are a little less graceful than they used to be. He kinda humps and jumps with big wonky strides. He’s lopsided as he grabs and climbs about the web, but he does move quickly still. Overall you can tell he has been injured, but each day, he holds his place in the web’s dead center and waits for a snack to fly on in.

It reminds me of a story, albeit a morbid one, that Wayne Dyer tells. It’s about watching a Nature type animal program, where a  group of zebras is attacked by lions. One of the striped horses got away from the predators, but not unscathed. He was torn up pretty bad actually. Wayne explains that the lions ripped apart one of his legs, and it was basically gone. Then Dr. Dyer, goes on to tell what the zebra does next. After the lions have retreated and the tension has dropped, the zebra begins to graze and munch on the grass with the rest of the herd. Standing there, on the three legs he has left, he just goes back to being a zebra. He’s hungry, so he eats.

So what does the spider and zebra tell me about life? I have lost limbs myself it seems. Maybe not a leg or an arm, but I feel that major parts of me, have been ripped away. Emotionally, I feel like a broken and torn up amputee from certain losses I have experienced in life. No matter when these things have happened, being very young, or much closer to the recent time, I notice their absence and the forced adjustments that I wish I didn’t have to deal with.

On the other hand, I do go about living. I do continue on, and keep trying to move forward with myself, regardless of how the pain ‘feels’ in the moment. I may not be making all the progress I want to, all the time, but somehow, someway, I do notice the movement as forward, and even mostly, business as usual.

I keep on human-being’ing even though I may feel that I am only a partial version of what I once was.

What else is there really to do? I see that spider, he just does exactly what he already knew to do, just the way he now can. I don’t see that he decided it was too hard, or not fair, or not worth the effort, and he just gave up. Probably he isn’t developed enough and ‘smart’ enough to have these kind of self-defeating thoughts in his little tiny spider brain.

Not like my big fancy over-developed human brain. No, I am much more capable of these helpful (NOT!) thoughts. I can deduce and dissect and see lots of reasons to avoid trying things, now that I am a messed up and broken person. I can decide to take myself out of the game and quit trying to do or be or experience parts of life that I could have done, had I been whole and good and not flawed.

I know that I let the ideas of ‘what others may think’ stop me from trying. I know fear plays a part in every one of my hesitations. When I notice the negative thoughts passing by, I may act on those and blame all of my shortcomings and limitations on the losses I experienced so far in life…

Setting up camp tonight was silly. Logic played no part. It was too late and too pointless of an activity to spend my time on. I didn’t care. I really do enjoy even an hour of relaxing in the hammock these days. Even in the middle of the night, even in the cold and in the rain. It was worth it.

Maybe other things in my world are worth it, just to try, just to begin to work on, even if they are silly or pointless or a waste of time. I am broken, I am beat up, but I have no reason not to keep going and keep being what I can be. I see the spider, continuing on his little but epic journey as well. He is in my path for a reason, I am glad he’s there. He is rooting on the survivor in all of us. We are down sometimes, but not out of the game completely. I thank God for these little messages in my daily walk with Him… 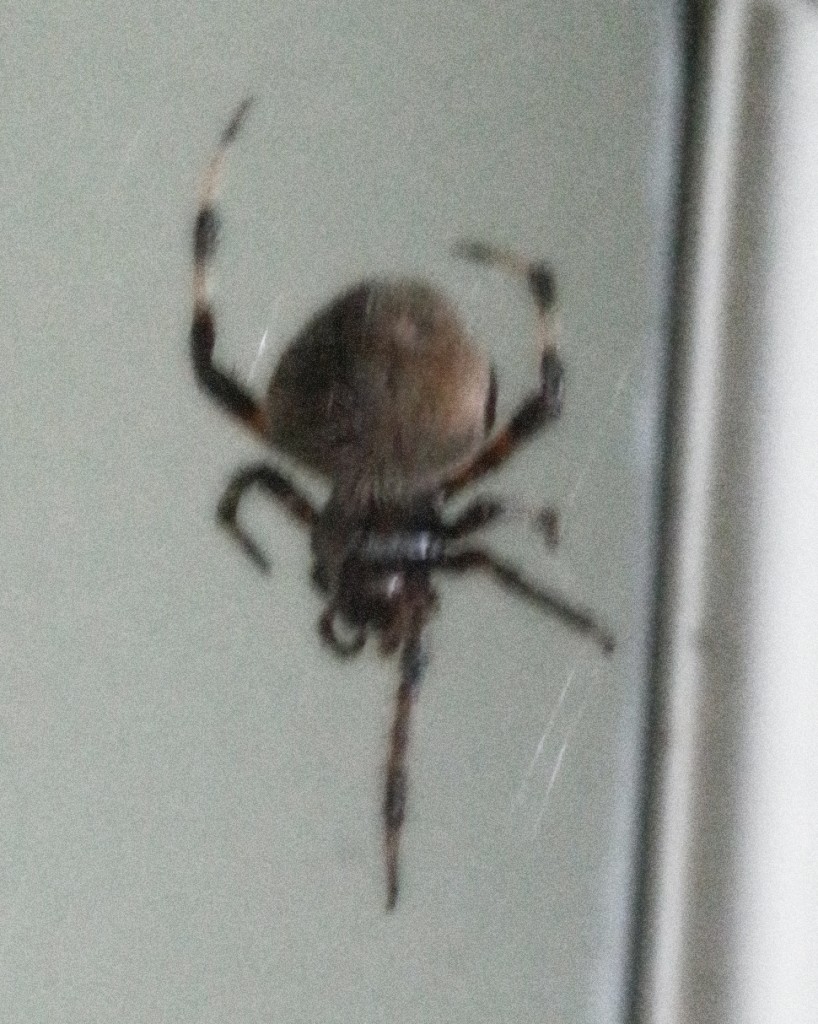 One thought on “Being Whole, Who Is? Not this 6 Legged Spider…”