Almost as long I can remember, skipping rocks across a pond, gave me an uneasy feeling. Sure, I knew to scout-out a smooth flat stone, with a perfectly curved edge. I could search for that one that fit a bent finger. I could spin it and float it, and send it skittering across the surface. When I did, I felt joy, just like all kids do.

But something bothered me about it. I would scour the banks of the lake, or rivers’ edge, and for each stone I passed by, I noticed that it would remain, where it had been, for eons. For each stone that I picked up, and threw into the water, it was forever moved. I chose to give it a new life, a new place to reside. It would no more bask in the sun some days, ice over in winter, and occasionally get wet, when the rains came, or waters rose. Nope, for as long as I could imagine; from that ‘skipping day,’ my little rock would now live at the bottom of the lake.

It seemed like a big responsibility to chose a perfect rock. I didn’t want to just throw things into the water to watch them splash. I felt that I was making a difference in the mini landscape around that pond. I at least wanted the act of skipping, to be worth it. I wanted to watch that rock dance on the water, even for just a little while.

In some way, I didn’t think that I deserved the right, to take an object from where it had been, and throw it in the water, just ’cause “I” wanted to.

Here I sit. Again at my desk. Again in the middle of the night. I’m looking right now at a thin red and squarish chunk of stone. It may be called dolomite. It used to live in California. 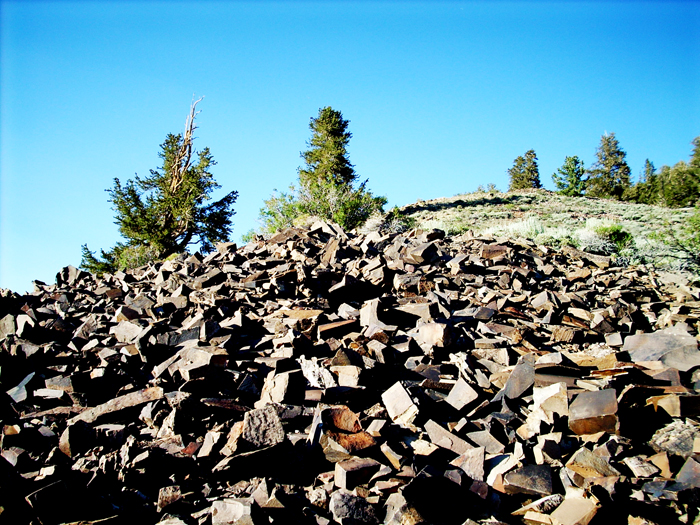 On an exposed rugged high-altitude slope, my little rock, used to live among his brethren. It used to be where the oldest living single organism on our planet is. It was with the bristlecones for thousands and thousands of years. Then I moved it.

I moved it to Princeton. It now sits on my desk, under a 30 inch screen. I see it often and think of that wonderful trip I once took. Maybe someday, I’ll return to the White Mountains, and take it back home. Hopefully the trees will still be there. Since they have been, almost as long as recorded human history.

I probably didn’t ‘need’ to take it with me. To bring it here. To displace something so beautiful. But there were millions more of them there… right?

I don’t know sometimes, how we are to interact with this world we’ve been given to inhabit. I’m no tree-hugger. I throw away recyclables every day. I consume fossil fuels and use disposable dishes and lots of unnecessary electricity. I leave my computer on, always… I’m just as cliche’d and irresponsible as anybody in my wastefulness.

What is it about this direct interaction though? A visceral connection to a small rock, something so trivial, that can eat me up inside, to know that I have caused it to change? I guess I inherently believe that things are already, the way they are supposed to be, in nature. Out in the natural world, there is a balance and rhythm, and I am usually messing it up, instead of helping or enhancing or beautifying it further.

I heard a quote on Sunday, from the Super Bowl winning quarterback, of the Seahawks. He said that he was raised and taught by his father, a question to ask of himself, as he trained and pursued his passion of football. ‘Why not You, Russel?’ his dad would say. He practiced and worked and came to believe that this is a valid and important question to ask himself, ‘Why not me?’, ‘Why not us?’, ‘Why not here, and why not now?’ And this year, they won the biggest game it was possible for them to win.

“Why not me?” isn’t a question that I can recall asking myself throughout my own life. Actually it seems to be the opposite. I seem to have many times asked myself “Why me?”, why did this situation happen in my life? Why aren’t things going the way I want them to right now? Why can’t I seem to figure things out, like Super-Bowl-winning 5 foot 11 inch quarterbacks can? Or the self-defeating notions that I am not worthy to cast a stone across the pond. I don’t deserve to mess up the life of that little rock…

And just now, the light flicked on. Just now, God’s shown me a possible purpose of this post. Just now, I see, that maybe, just maybe, that overgrown pebble, waited on me  for millenia. It sat hour after hour, day after day, decades and eons of time, just waiting for the moment it was going to fly! Maybe, just maybe, I was giving a gift and zipping a thrilling experience for some grain of consciousness embedded in the creation of our landscape. Maybe God has given us the world, to be stewards of, and yet, still enjoy, still have fun and play within.

There is possibility and opportunity and tools and resources all around us, all the time. Forever we cohabit with precious and generous offerings of value, gifted by the Creator. I hope we do use balance and I hope we find ways to moderate. But at the same time, right now, in our real daily lives. I hope we start to ask ourselves questions like “Why not me?”, ‘Why not now?” “What is stopping me, from truly enjoying life, right this moment, under these exact circumstances?”

Maybe, just maybe, we could loosen our grip on the ‘safety’ of our stuck places, our cemented-in spots that we’ve carved out over eons of our existence. Maybe, God will come along and zing us out into new territory, to new places and splashing across the fresh cooling waters. Maybe we’ll skip all the way across, and end up in a new land. A new start. A promised land.

One thought on “Skip Day! No, not Snow Day…”